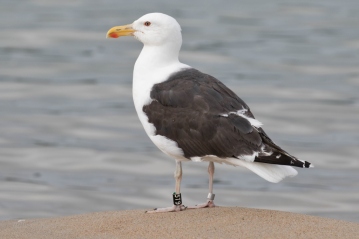 The larger of the two gull species breeding on Appledore, Great Black-backed Gulls (or GBBG in the ornithology parlance) are massive, with a white head and belly, pinkish legs, and a slate-gray back as adults. It takes the birds four years to gradually attain adult plumage.

The GBBGs in our project are banded with a silver, federally issued band, and a larger, field readable band with a white alpha-numeric code on a black background. 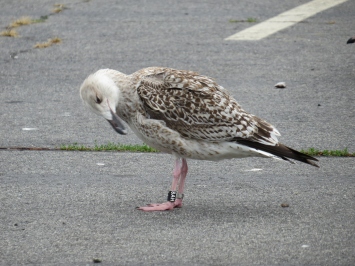 Gulls breed on islands like Appledore to evade ground-dwelling predators like raccoons and skunks on the mainland. But islands are small, and don’t provide enough food for the birds to remain there year-round, or even to feed their young during the short breeding season. As a result, you may encounter Appledore GBBGs just about anywhere, and anytime. Our breeding birds are known to commute from the island to the mainland to find food for the growing chicks, so a bird you spot in Massachusetts at noon may be back on the nest by 2pm. Once the young have fledged, the birds leave Appledore and the island is quiet until the following spring. At that point, the birds disperse to points (known and unknown) all over the eastern United States. Our birds have been sighted as far west as Indiana, and as far south as Texas and Florida.

Young gulls travel to more far-flung places than adults, so you may well encounter a subadult many hundreds of miles distant from the island of their hatching and rearing. We are always curious to know where these youngsters spend the years of their adolescence before returning to breed on Appledore.

If you see one of our GBBGs, please let us know! Every sighting is valuable to us, whether the bird is frequently sighted, or hasn’t been seen in years. Thank you for participating!