The banding team is on Appledore Island this week (July 11 to 17) banding Great Black-backed and Herring Gull juveniles about to fly.

As of Thursday no juveniles had yet been seen flying on Appldore .  So the team was enthralled to witness the first successful flight of a Herring Gull.  As the team watched from across the narrow cove, the youngster practiced a few lifts in place, furiously flapping to rise a few feet above the rock.  Then a pause, followed by a full honest flight for about 50 feet with a soft landing.  Returning at a run up-slope to the rock crest a short rest followed. And then, with a parent ‘cheering’, a true flight about sixty feet, a turn and a flight back to the rock.

This is the first observed juvenile flight of the year on the Island.  In the coming weeks the banded Herring Gulls and Great Black-backed Gulls will be dispersing to mainland New Hampshire and then throughout the east coast.  I hope you are able to see one of the banded gulls and report the band number back to us.  Each and every report is most welcome.

Banding gulls is demanding work on rugged Appledore Island in Maine.  Here’s the tough and effective team at work in the rocky terrain.  The Shoals Marine Lab buildings occupy a small portion of the Island and gulls nest along the pathways and buildings but many gulls choose to nest in the jumbled rocky shore areas.

Below: The 2016 banding team;  Kyla, Jamie, Taylor, Eric, Dr. Sarah Courchesne, Jinette, Liam. Mary Everett, and Taylor Ouellette.  Mary and Taylor have been ‘On-Island’ involved in gull studies since May; both are experienced gull workers from the 2015 season.  Jamie and Eric have both assisted in prior banding operations on Appledore. 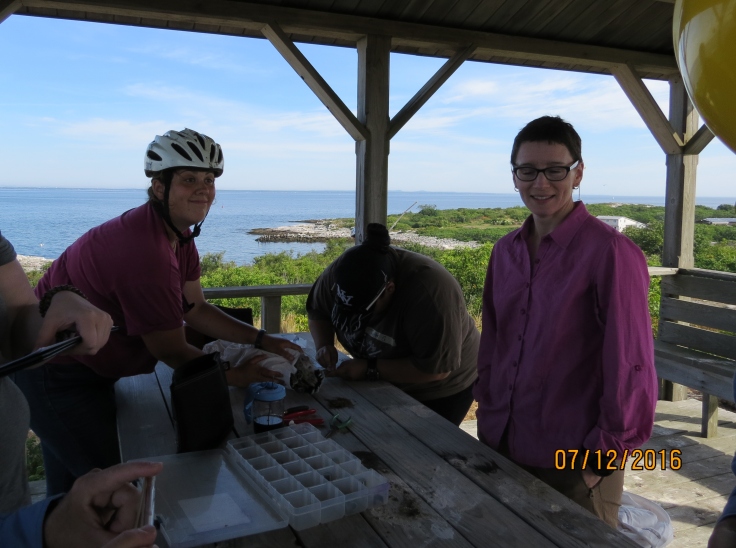 Great Black-backed Gulls, one of the study species at Shoals Marine Lab on Appledore Island.  The present gull study began in 2004 and builds upon prior studies conducted on Appledore.