Greeting Folks! Justin here again. If you remember from a few posts back, we had a couple of Great Black-backed Gulls that made independent excursions to Canada, including first year GBBG, 9R7.  Interestingly, on January 30th, Corrine Folsom-O’Keefe found 9R7 in Galilee, RI. What’s most impressive is how this gull, in its first winter, flew from Appledore to Canada to Rhode Island within just a few months.  Unlike other bird species that migrate very long distances to and from the same locations each year, gulls do not have set migration patterns.   This bird appears to be moving around in response to a number of possible factors including food availability and weather. 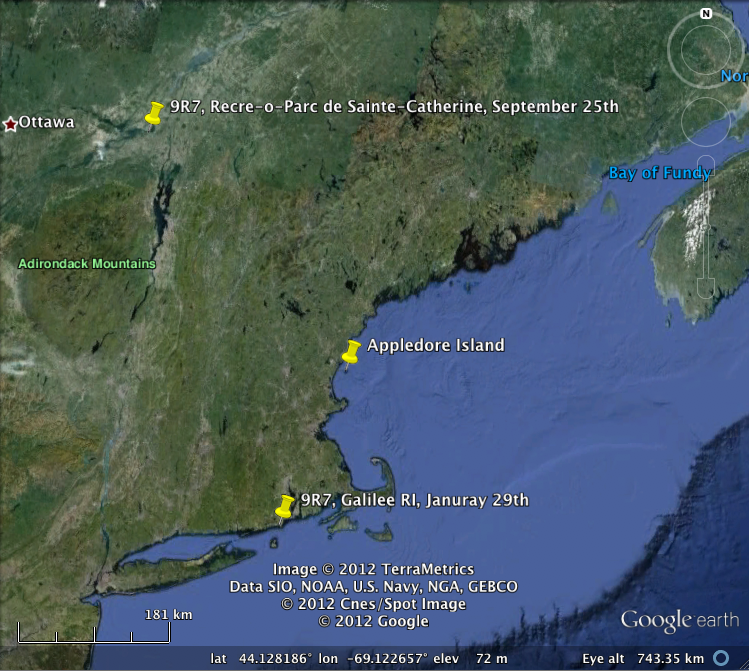 Other recent sightings come from William Nichols and Louis Bevier. Nichols spotted 7K5 at the Hatch Hill Landfill in Augusta, ME. 7K5, a 2nd year Great Black-backed Gull, was banded as a chick in July 2010 at the edge of Sandpiper Beach and Sandpiper Beach Road. Nichols and Bevier also spotted  first year GBBG, 2T3, in nearby Augusta at a popular loafing spot for gulls that visit the landfill. 2T3 was banded in July 2011 at Larus Ledge and came from a marked, monitored nest.

Gulls, once hunted for their feathers and eggs, were legally protected from hunting in the early 1900s.  Their populations then increased dramatically in the 1960s and 70s as a result of food subsidies from growing populations of humans living in coastal areas.  Gulls, being opportunistic foragers, were able to take advantage of human-derived foods from landfills and fisheries discards.  In recent years, some landfills have stepped up gull control efforts, potentially altering winter dispersal patterns and population trends.

We recently realized that while  we band gulls only on Appledore, our readers may not know about the various locations on the island (such as Sandpiper Beach or Larus Ledge). So we’ve added a new page to this blog with a map of Appledore.  We hope it helps you get oriented to the home of the Appledore gulls!