Bill Clark,  “gull wrangler” extraordinaire, landed on Appledore Island yesterday and reports that the Lesser Black-backed Gull has returned to his usual nest site on Appledore. 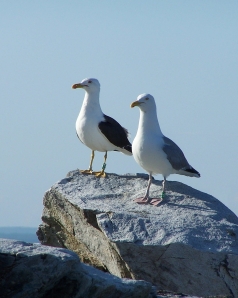 LBBG and Herring Gull mate in 2009. Photo by Bill Clark.

The LBBG started nesting on the island in 2007 and has returned every year since.  We banded the LBBG and his Herring Gull mate in 2008; they both returned in 2009 and raised two chicks.

In addition to searching for banded gulls on Appledore, Bill volunteers at the Appledore Island Migration Banding Station (http://www.sml.cornell.edu/sml_research_birdbanding.html).  Each year, thousands of songbirds stop on Appledore Island during migration.  The main focus of the banding station is to study migration and stopover ecology of Nearctic and Neotropical migrants.  In May 2009, a Gray Catbird was the 100,000th bird banded at the station!

Late next week, Bill will switch from helping band cute little songbirds to wrangling large, angry gulls.  Bill started volunteering on the gull project in 2005 and has returned every year to resight banded birds and to help capture and band new ones. 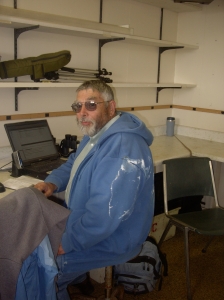 He has returned each year in spite of being hit on the head, bitten, and…..eh hem….pooped on.   Even after a long day in the field, Bill still has a smile on his face…..and, a little poop on his back….

Thanks to Bill for contributing  your skills, ideas,  energy, dedication, and good humor to the gull project!