Reports and photos of live and healthy Herring or Black-backed Gulls with green or black readable field bands are always wonderful to receive.  But also quite appreciated, are notices of deceased banded gulls since both types of information are valuable to the various ongoing research projects involving Appledore gulls.

The ‘deceased report’ for 7A6 was received from a gull control project near Rochester, NH.  The report was dated September 9, 2009. 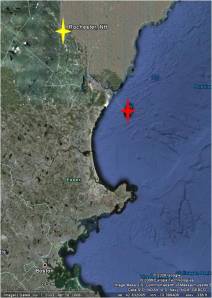 In 2007, the same nest area was used by 7A6 and mate, 1E2.  One of their chicks was also banded (8N9) in that year.  We will be watching for the entry of either 4E1 or 8N9 into the breeding population on Appledore in future years.

In 2008, 7A6 nested in the same area of Appledore Island again with the same mate, 1E2  (Herring and Great Black-backed gulls are typically monogamous).  Three eggs were recorded in their nest in May, but no chicks were banded.  7A6 was once again nesting with mate 1E2 in May 2009 – in the same location as in previous years.  The last live sighting of 7A6 was on Appledore on August 21st of 2009.

7A6 tidying up near its nest on Appledore; photo by "gull wrangler" Bill Clark.

Some may wonder why only one chick was banded from the 7A6 and 1E2 nest in 2006 and 2007.  Herring and Great Black-backed gulls usually lay three eggs and many nests thus have three chicks.  The ideal is to band all the chicks in a given nest.  However (note this little qualifier), when banders approach a nest, half-grown chicks have full-grown legs and know how to use them!  Thus, catching even one chick can prove very challenging.  Chicks also have a habit of heading into the dense brush and poison ivy near the nest.  The reader quickly infers the result.

The report of 7A6 from Rochester by Jacob Borgeson is greatly appreciated.  Each report adds to the several ongoing research projects on the Appledore gulls.  If you see a banded gull (dead or alive) you may report via this web site or the USGS Bird Band Report site.